Posted below are a few excerpts from some of the short fiction we’ll be publishing in Issue 6, which will be available at the end of this month/early December. Enjoy.

“Someone in the Room Will,” by Falcon Miller.

When the police came, he was at work and Frederick was at school like he shoulda been. I’d just come back from getting my nails done and was going to call Aunt Edda to talk about Thanksgiving. My nails were looking real good. I’ve always kept them long, and this time I had the girl paint them a deep red. Frederick should know that his mother was not just good in bed but also a woman of sophistication, so I did them this way.

Anyway, the police came, and I let them in. I thought they wanted to talk about The Masher in the neighborhood and if I knew who he was. They asked me if Frederick was home, and I said, “He’s at school. Jesus Christ! Is The Masher going after boys now too?”

They said no, but, incidentally, they had some questions about Frederick anyway, and did I mind. The two of them wouldn’t sit down when I offered them the chairs in the dining room. They just stood, so we made a triangle. They had their heads to the side and were really serious. I didn’t know what they had come for, but I turned the TV off.

“Mrs. Van Osten, what would you say your relationship with your husband is like?”

“Would you say you have a happy marriage?”

“No, but I’d say it’s a good one. Van said he’s taking me to France soon, and we’re gonna leave Frederick behind.”

“And why are you leaving Frederick behind, Mrs. Van Osten?”

“Van’s jealous of his own son. Can you believe that? He wants to get me back all to himself.”

“And why would he be jealous of his own son, Mrs. Van Osten?” The taller policeman moved his head to the other side when he said this.

“I don’t know. You’d have to ask him. I don’t tell him about me and Frederick, but I think he knows and doesn’t know what to do about it. Frederick’s better in bed than he is.”

The one policeman looked at the other. Then he said, “So that must be hard for your husband, Mrs. Van Osten. Have you two spoken about this—the fact that you think your son is better in bed than he is?”

“Naw. I don’t think Van wants to talk about it, but we are supposed to be going to France.”

“And, Mrs. Van Osten, you say your son’s in school right now. Is that right?”

Then the other policeman moved in a little closer, like I’d said I was in pain and he was here to help, and said, “We’d like to hear more about your husband and son, Mrs. Van Osten. Would you mind coming down to the station and telling us more about them?”

“Yeah, sure,” I said. But the cops had messed up my plans, and I wasn’t sure, but I didn’t feel like I had a choice but to go with them since they said they were cops. No one was gonna be here for Frederick, and I had promised myself that I was going to be in a silk underwear set today when he got home, except I hadn’t figured out which one yet, so I needed to try them on. He said he didn’t like lace, and I wear cotton every day, so this was gonna be special.

“What time can I leave your place?” I said.

“What time will Frederick be home?”

“You’ll be home in time to warm up his dinner, Mrs. Van Osten.”

That was great, except I never made it home in time. I didn’t make it home until four months later. When I got back, Van had left the bankbook and his employee assistance program brochure from his job. A number was circled, and there was a note written over the list of services: “Call them but don’t use your real name.”

A couple of snippets from “Dog Days and Wet Dreams,” by Richard Hamilton

The summer sun was strong and I sipped a bottle of pink lemonade spiked with vodka. I was almost out. I had panhandled and enough fell in my cup for two pints of vodka, with about 2 dollars to spare. I hated vodka, but it was cheap and plentiful. I especially hated this vodka,which was called Ruble, although some called it Rumble or Somerville’s Finest, as it is produced in Somerville and gets you violently, cheaply drunk. It was four dollars a pint up the street. I had a late start that day, having slept till two in the afternoon. Now I was almost out.

Saint Peter walked by, his smiling face grizzled, his voice like broken rocks and smoke. “Hey, Rigsbee! What’s up for today?”

“Almost out of booze. Broke. Half drunk but I’ve got a ways to go.”

He walked out of the park. Students and office workers flitted past. In my foggy brain I tried to imagine being normal. To this day I can’t fathom living a normal, decent life. A day job, 40,000 a year, a wife, kids, and just working and coming home for dinner, everyone talking about their day. I imagined an imaginary wife asking me about my day: “Well, sweetie, I sat on the pavement and panhandled and drank booze all day with bums and petty criminals…”

St. Peter returned, on a bike. He rode up to me with a big grin on his face.

“Probably belongs to some yuppie that didn’t put a decent lock on it. I went over to the bike racks by the station. So many to choose from. I’ll be right back kid.” He began to ride towards the station and the bike path beyond, quickly though a little wobbly. As he rode off I heard his cracked laugh.

I meandered. I walked back over by the slab, which is a slab of concrete by Store 24. People sat on it, having ice cream, or drinking from paper bags, or whatever. There were benches arrayed around but many gravitate toward the slab. There was graffiti marking it up. The graffiti was always changing. It was washed off, then people would write on it again. I bought a cheap one-dollar coffee at Store 24 and sipped it on the slab. My drunk was fading fast, and the coffee sat uneasily on the vodka and gin. But I was tired and empty and needed a jolt and to consume something. A girl named Caitlin sat on the slab, looking bored. She was a presence in the square, but I’ve never been close to her. She was 18 or 19 and friends with some of the latchkey kids I’ve mentioned. But we were never introduced, though in a roundabout way she would come up in conversation and I would express that I thought she was pretty. She wore a red dress and she was slender and pale and pretty. She had red hair and thick black glasses. Her lip was pierced. Altogether she was like this aspiring down-and-out hipster. She glanced at me shyly and I sipped my coffee and took her in. I lit a cigarette. She walked over, smiling, and asked for one.

“Thanks!” She took the cigarette and she walked away toward a couple of skaters who were standing around. They conspired together and wandered off.

Peter came back, on foot. He was smiling. He carried a twelve pack. He reached into his pocket and handed me a ten-dollar bill. 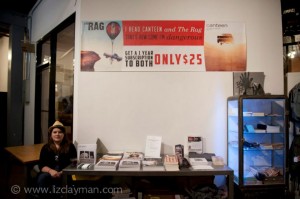 The Rag News: Now and Then